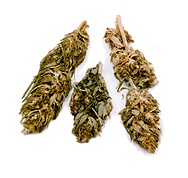 Marijuana refers to the dried flowers of the Cannabis sativa and Cannabis indica plants. Originally native to Central Asia, Cannabis is now cultivated throughout the world. Marijuana is the most often used illegal drug in this country. The main active chemical in marijuana is THC (delta-9-tetrahydrocannabinol). Of the roughly 400 chemicals found in the cannabis plant, THC affects the brain the most.

As of July 2015, Colorado, Washington, Oregon, Alaska, and Washington D.C. have legalized adult recreational use. In Texas, marijuana usage and possession for any use is still considered illegal. A conviction for possession of up to two ounces of marijuana can result in a jail sentence of up to six months and a fine of up to $2,000. Learn more about Texas marijuana laws from Legal Services for Students.

A national study conducted by the Substance Abuse and Mental Health Services Administration in 2014 found that 8.4% of Americans 12 years or older regularly used marijuana. The National College Health Assessment for The University of Texas at Austin in the spring of 2015 found that 19.1% of students used marijuana within the past 30 days, with 2.2% reporting daily use.

Users typically inhale marijuana through smoking or vaporization. Users may also ingest marijuana. They typically experience heightened mood, euphoria, relaxation, and appetite stimulation. Long-term marijuana smoking is associated with an increased risk of some respiratory problems, including an increase in cough, mucus production, airway inflammation, and wheeze – similar to that of tobacco smoking. According to the Coronary Artery Risk Development in Young Adults (CARDIA) study, infrequent marijuana use has not been associated with adverse effects on lung function, though other studies cannot conclude that light marijuana smoking is safe for the lungs. Additionally, many marijuana smokers also smoke tobacco, which further increases harm.

Marijuana can be habit-forming. Marijuana does not produce the same physical dependence (as characterized by withdrawal symptoms) that other drugs, including caffeine, heroin, alcohol, and nicotine have the potential to cause in high frequency users. Withdrawal symptoms are mild compared to other substances, and symptoms disappear within a few days. However, this does not mean marijuana is a risk-free substance.

As of January 2016, at least 23 states have legalized marijuana for medicinal use. In Texas, marijuana usage and possession for any use is still considered illegal.

Q: Can the effects of smoking marijuana last up to two full days?
A: Yes. The length of the effects of smoking marijuana will differ by individual and can be affected by length of use, tolerance, and body composition. Tetrahydrocannabinol (THC), the main active ingredient in marijuana, is extremely fat-soluble, which means it is stored in the body's fatty tissues and can slowly enter the bloodstream for up to two days after smoking.

Q: Can smoking marijuana change your mood?
A: Yes. Some users may experience heightened mood, euphoria, relaxation, and appetite stimulation. Others may experience mild flashbacks, anxiety, or panic attacks, and marijuana has been shown to heighten certain preexisting psychological conditions such as anxiety and panic disorders.